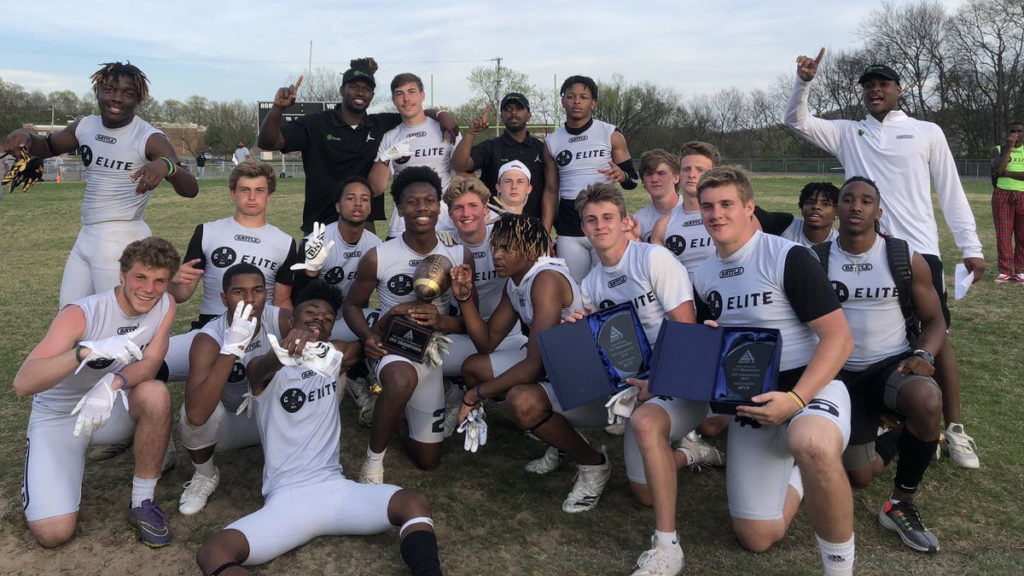 NASHVILLE, Tenn. — There’s no doubt that it was a hard-fought day on the gridiron for each of CBA’s four squads, but it came to be well worth it as College Bound Athletics’ CBA Platinum team went into Maplewood High School at the Elite 3 Showcase and walked away with the tournament championship.

A combined CBA Gold/Black team to make the CBA Elite Platinum team put together its best performance of the season on Saturday to defeat host Elite 3 White in the title game and take home the tournament trophy.

Leading the way for Platinum on Saturday was the combined play of 2021 quarterbacks G.J. Flippo and Trevor Andrews. The two signal callers combined to throw 76 completed passes of an 118 attempted throws and passed for 1,044 yards with 20 touchdows and three interceptions. Both showed poised in big moments and made proper throws to keep drives alive throughout the day.

Both Flippo and Andrews succeeded at distributing the ball to multiple receivers, giving each of their receivers a true chance to shine and come up with big plays. While every member of the team contributed on offense to winning, it was the play from tournament offensive MVP, Logan Neufeld, that stole the show.

The diminutive athletic receiver became the go-to guy throughout the tournament for both Flippo and Andrews and displayed on several occasions his big play ability and his toughness. Neufeld, a White House senior-to-be, played a key role to the team during bracket play, coming up with numerous big plays, many that he took to the end zone. Though smaller than the average receiver at 5-foot-6 and 140 pounds, Neufeld is more than able to compete with some of the best talent that high school, and potentially college football has to offer.

Not to be out done by the offense, the Platinum defense acted as the catalyst towards earning the tournament title early on. The team’s statistics, as well as intangibles were the best performance from the Gold/Black defense this season, and the newly-minted Platinum team played with passion, focus and the desire to win.

Leading the way on defense was Beech (TN) linebacker Will Crabtree. The senior-to-be had a rough start after going down from a hit that kept him out for several plays, but was able to quickly re-focus and earn tournament Defensive MVP. Crabtree played well in space, dropping into coverage and ended the day with multiple interceptions. He also deflected several passes while staying in his lane and playing his role. Crabtree was consistently around the ball and stepped up at big moments when his play was needed.

Mt. Juliet (TN) athlete Todd Harris came up with a huge interception in the late stages of the championship game against Elite 3 White to seal the victory. McGavock (TN) defensive back Kevonte Dorris also had a solid tournament, coming away with several picks. Dorris stepped up his game even more in the championship, though, locking down the outside and fighting for every ball thrown his way.

Collectively, it was a total team performance from the CBA combined teams that paid off in the end with a tournament championship. Holding a title in hand now, the College Bound Athletics program has taken its next step towards statewide 7v7 prominence.

Improvements were made throughout the day, but it wasn’t quite enough for CBA Elite Green and Steel, as both teams were eliminated early in bracket play at the Elite 3 Showdown. Collectively , the two teams went 1-7-1 on the day. CBA Green was able to secure a  strong win during pool play as they defeated J3M Blue, 18-8.

2021 QB David DeRocher continues to show promising progression as a signal caller, but still has some room to improve while he strives towards reaching his maximum capabilities. DeRocher is a sound leader with a power right arm, and was able to make several key throws throughout the tournament. Be on the lookout for DeRocher as he gets more playing time this 7v7 season and his high school season this fall.

Not to be outdone, arguably the most successful athlete on the Green and Steel teams for the day was Wilson Central athlete C.J. Morrow. The senior-to-be was able to play on both sides of the ball for CBA Elite Green, and stood out exponentially on offense as he made several tough catches, and catches when they were needed the most.

The Steel squad saw many positive upswings during the tournament, but the positives weren’t able to materialize into victories. Though it was a winless day for CBA Steel, they were still highly competitive throughout the entirety of the day. Quarterbacks Davis White and Colbey Lamberth had good showings, leading multiple strong drives each, and finishing with scores.

Consistency showed to be problematic once again for CBA Elite Steel. All four games were played competitively, and many times, Steel showed signs of success, as well as chances to succeed, but it never was proven in wins. It’s clear that CBA Steel has talent, and as they spend more time playing together and learning the game, expect to see the victories start to come.

Throughout the 2019 7-on-7 season, CBA Elite White 15U Futures team has been the most consistent team in the program and that continued during the Elite 3 Showcase. While it was another good performance from the White team all day, they did falter in bracket play, bowing out in the first round of the 15U bracket.

CBA White went nearly perfect as they finished 2-1, but they did not give up a single touchdown on defense. It was an excellent performance from the White defense as they were undermanned overall while also dealing with the loss of their top offensive threat in 2023 athlete Jayden Satterfield, who went down early in pool play with a hip flexor issue.

2022 Macon Co. (TN) runingback/linebacker Dawson Long had a standout performance on the day as the rising sophomore played both ways. Long stepped his game up on offense in particular, becoming a dependable pass catcher and reliable when his team was in need of first downs.

After a positive pool play in the morning, all was looking good for players and coaches, but things quickly turned sour after an opening round defeat to Elite 3 Red, 34-o. Though the White defense held strong all day, it seemingly ran out of gas and lost its focus when it was needed most.

It’s no secret that CBA White has the arsenal it needs to win, and it’s a matter of time from the athletes to coaching until a tournament championship has their name on it.